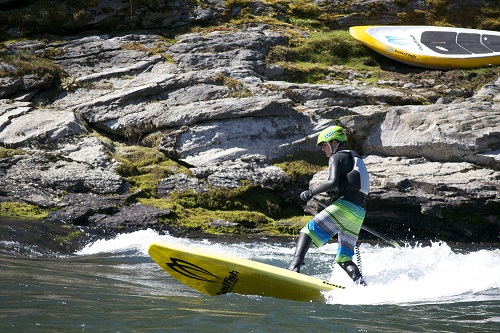 The immense might of the Spokane River raged by as Charlie Cindric paddled his stand up paddleboard to the churning edge of the current where the safety of his eddy ended and the wave began. The pillow of whitewater crashed, pulsing continuously, irregularly, as he heaved the final stroke that brought him into the current. He seemed to sail forward onto the wave, paddle working lazily now as the board bobbed and surfed under his expert guidance. He made it look easy. But one wrong move and he would be swimming the rapid that seemed to wait, menacing and patient, behind him.

Cindric is a stand up paddleboard, or SUP, champion, having won first place in his division at the Payette River Games in Cascade, Idaho at Kelly’s Whitewater Park last year. The Payette River Games is arguably the largest and most prestigious SUP competition in the United States. With its prize purse of $50,000, athletes compete in two different river running events, SUP Xross and SUP-er G, where they go head-to-head with the best paddlers in the world for both time and score.

In 2014 Cindric competed in every event and won his division. He was only 12. “He just had a natural knack for it,” says Charlie’s father and certified SUP instructor Chris Cindric. Charlie started at age 10, coming to the river with his dad. “I’d come down and then I’d film, then practice ferrying across the river, doing that,” says Charlie. And three years later, at 13, he’ll be competing for the 2015 prize in the Elite class, with some of the best stand-up paddle boarders in the world. He’s also a sponsored member of the Badfish “Grom Team.” Grom, short for grommet, is a slang term taken from ocean surfing and now used on kid river surfers with talent. And Charlie has that in spades.

And he doesn’t just rely on his “natural knack;” he trains hard too. He does cross-country and track, skateboards, snowboards, and generally cross-trains, not to mention surfing, running rivers, and paddling flat water on his board, all of which he and his dad do year-round.

“The Spokane’s nice because there’s typically a wave that’s in at some point, somewhere,” says Chris. Charlie’s favorite spot is Trailer Park Wave. “It’s the best wave to surf in Spokane,” says Charlie. And surfing is Charlie’s favorite. “It’s just fun,” he says, with a mischievous smile.

“You can kind of bring it to whatever level you want,” says Chris. But if you’re just starting out, it’s important to take a class. “People see this happening, and then they try it, and they put themselves in bad situations,” says Chris. “It’s more than just standing up on a board.”

However, it’s not all serious training for Charlie and Chris. For them, SUP is a family affair. “Stand up paddling as a family is great because the paddleboard is like a platform for the kids,” says Chris. “So it’s not like struggling to get into a canoe or a kayak even….It’s just five inches off the surface of the water – the kids swim off of it.” Even Charlie’s three younger siblings enjoy SUPing. They try to do flips from the board, and occasionally try to knock their parents off.

The Cindrics already have a family trip planned for this summer. The whole family is heading to the Payette River Games where both Chris and Charlie will compete, and eventually to Northern California, where they want to see Crater Lake and the Redwoods. And surf, of course. “We’re just going to be a big ol’ SUP family,” says Chris, smiling. //