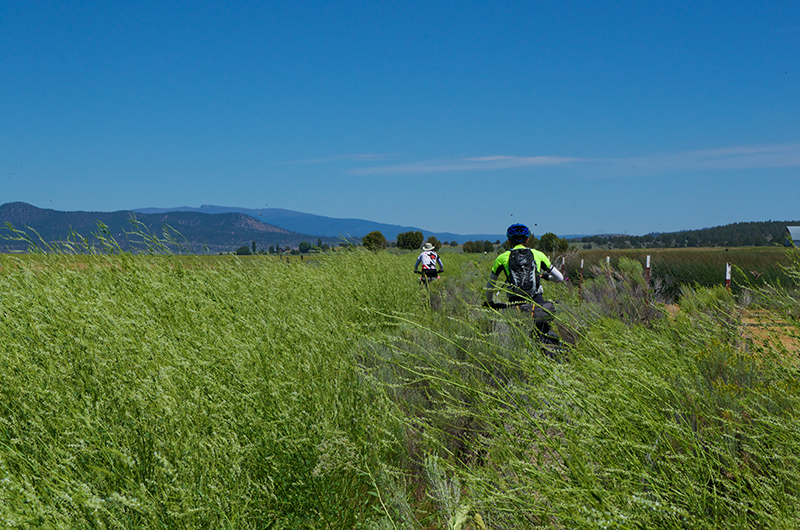 I really enjoy the quiet and isolation of bike packing through the countryside. The Oregon Outback Route offers a lot of that. Connecting Klamath Falls with the confluence of the Deschutes and Columbia rivers, the Outback route follows rail trail, gravel roads, forest service roads, and some pavement through very lightly populated terrain. The sparse countryside is just as beautiful as it is tough. A handful of small towns serve as very welcome oases.

My brother, John, and my son, Geoff, joined me in Klamath Falls on July 4th. The next morning, the hot sun blazed as we set out on the OC&E Woods Line State Trail, a rail trail, heading east and then north. In less than an hour we left the paved trail and civilization behind. We rambled through ranch land with countless cattle, pastures with horses, wetlands with head-high vegetation, and thickets of scrub brush. After 60 miles, we camped near a creek on the outskirts of the Fremont National Forest.

The next day, we finished the rail trail and switched to gravel and forest service roads. Through forests and grazing land, we pedaled 72 miles to Fort Rock where we enjoyed draft beer served in frosted mugs at The Watering Hole Tavern. Searching for a place to camp, we spotted a lawn at the community church. Unable to contact anyone from the church we asked a neighbor if she’d think they’d mind if we pitched our tents there. “Of course not,” she said. “They’re church people.”

Day three was another sweltering day, and there was less water available along this part of the route. We suffered through the loose red dust of National Forest Road 22. The deep parts would bog us down like quicksand. Grinding away in the heat, we consumed most of our water. Arriving at Sands Springs, we found a fenced off puddle of murky, stagnant water with a cow pie at the water’s edge. We filtered some of it, but the resulting green liquid was too unappealing for us city boys. We decided to skip it.

Instead we took a 14-mile round-trip detour on Highway 20 to Brothers, OR where we ate, rested, and replenished our water. Thirty-two miles later we arrived at a campground by the Prineville Reservoir. We slept the sleep of the dead after an 84-mile day.

The next morning we rode forty miles of paved road to the Ochoco National Forest. The route changed to a rocky road, and it was twenty-five miles of downhill across creeks and through trees to Ashwood. In Ashwood we found a small field with picnic tables and shade trees next to a grange building. A resident told us we were welcome to camp there. There’s a water spigot and pit toilets behind the grange building.

Day five was supposed to be an easy thirty miles, but we ended up climbing more than on any other day. Trees gave way to scrubland and the sun was brutal. We enjoyed a relaxing afternoon in Shaniko that included cold beer and ice cream.

From Shaniko the final leg of the route called for 70 miles with no water and no shade. Fortunately, the temperature dropped to 80 degrees that day. At midday, we diverted to Moro on Highway 97 for lunch and water. We paid dearly for it. Leaving Moro, we fought a 20-30 mph headwind while climbing for several miles. Then we battled headwinds in wide-open farmland all the way to the Columbia River. We were relieved to arrive at the Deschutes River State Recreation Area.

how to get to the starting point and how to get home after you’ve finished. John lives in Tacoma and Geoff in Oakland. Getting to Klamath Falls was easy. I drove to Tacoma where John and I caught the Amtrak. Geoff also took the train from Oakland. When we finished the ride, John’s wife, Susan, was kind enough to drive three hours to pick us up. We dropped Geoff off in Portland where he caught the train back to Oakland. And I drove home after spending the night in Tacoma. We were very thankful for Susan’s help.

Much of our ride went through what could easily be called the middle of nowhere. We admired heron, hawks, an owl, a bobcat, and other wildlife. The Oregon Outback Route offers plenty of nature with a touch of civilization in just the right places. //

Hank Greer is an avid bike commuter and runner. He wrote for the Everyday Cyclist column in August.