Off the Beaten Path: The Quirky Charm of Scottish Lakes High Camp 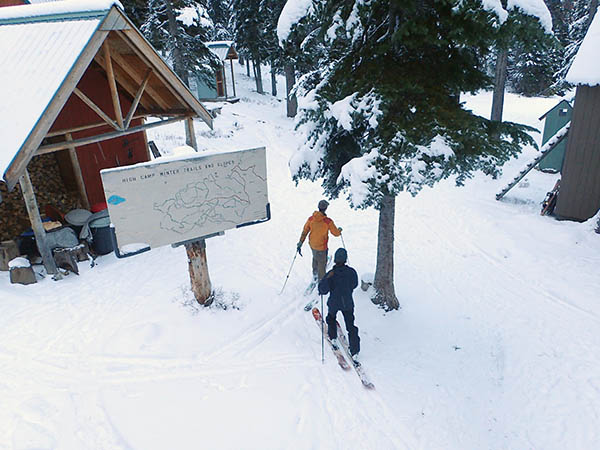 This was a curious dogsled. Our 75-pound dog wiggled in my lap as we sat behind our driver. Behind us, my husband hung on upright to the rear of the snowmobile, dogsled-style. Behind him was an attached sled that held the food, clothing, and creature comforts that would see us through a weekend of playing in the snow at Scottish Lakes High Camp.

Half the fun of Scottish Lakes High Camp is getting there. Employees of the camp meet you at a secure parking lot about 20 miles west of Leavenworth, where you load your packs, coolers, and winter gear onto Suburbans from decades past, fully reworked to handle the snowy incline you’re about to experience. Four miles later and 1,300 feet higher, you disembark yourself, your gear, and your dog and then load everything back up on a snowmobile for another four-mile ride into camp. If this sounds like a lot of work, it’s overshadowed by the beauty of the area, the friendliness of the camp staff, and the decidedly adventurous means of getting guests and gear up a mountain. 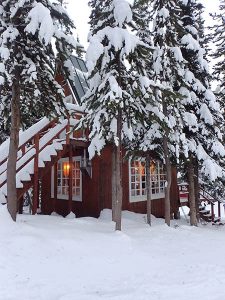 Rounding the final turn of the snowmobile trail, you happen upon a mini-Santaland village. Nine small cabins with steeply pitched A-frame rooflines are situated throughout the 20-acre camp, which also includes a day lodge, a cedar sauna building, a wood-fired hot tub, and several outhouses (aka “mountain comfort stations”). Here, snow is measured in feet rather than inches, and the camp hosts clear paths throughout the village daily. When indoors, guests feel as if they’re inside igloos as they peer out the snow-framed and jack-frosted windows. These igloos just happen to be very tall (several cabins are on stilts, a detail that you might miss until the snow melts) and feature the warmest wood stoves you ever huddled around.

Christine Hanson has owned Scottish Lakes High Camp since 1994. “We bought High Camp for the recreation, both winter and summer,” she says. “We loved the idea of a total life change and working in the backcountry.” If “corporate” culture starts at the top, Hanson’s operation reflects her kind spirit and deep love of the natural area that surrounds High Camp. She employs six camp hosts who do everything from transporting guests and gear to repairing, maintaining, and cleaning the camp buildings and vehicles, to chopping and stacking wood, to clearing and marking trails. But the most visible responsibility of the camp hosts is to welcome guests, providing a familial community. “Saturday night potluck dinners are a huge hit for most of our guests and a great opportunity for staff and guests to know each other a little better,” says camp host Rich McConnell. He’s right; our group of 14 felt enough at home to break out an old acoustic guitar for a post-potluck singalong. Rich and his co-host, Zeke, just encouraged us with what I suspect was not altogether reverent laughter. 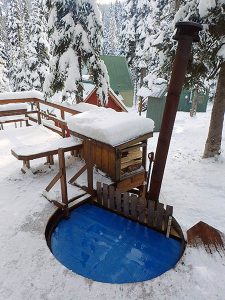 Familial community aside, guests initially visit for the trails, miles of them, that lead through meadows and woods to lakes and vistas that take (the rest of) your breath away. High Camp literally functions as the trailhead to several of the trails, so the only thing delaying your first hike is your morning coffee. There are enough trails to keep you out all day for several days in a row. And there is enough variety in the terrain to satisfy aggressive hikers as well as amiable amblers. One morning, we snowshoed the McCue Ridge trails to an overlook called High Point, on the way almost tripping over the Inspiration Lookout trail sign, now at snowshoe level. Some of our group brought skis and snowboards, and after a snowball fight, they took off back down the trail while the rest of us followed on toboggans and snowshoes with two dogs in tow.

Back at camp, some took advantage of the wood-fired hot tub, which the camp hosts drain and refill daily, and the cedar sauna. Others lounged in the main lodge, which is well-stocked with decades-old National Geographics and regional hiking guidebooks and board games on shelves made of old skis. The main lodge also features the only running water in the camp (we’re in the backcountry, so this is an extravagance) and a full kitchen. “I want guests to feel free to do whatever needs to happen for them on vacation,” says Hanson. “They should not feel pressured to hike or ski when they need to relax in their cabin!” 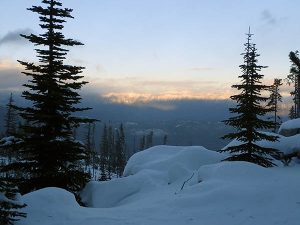 Mission accomplished. Indeed, only a couple hours after our group arrived, we were already fantasizing about pooling our money to purchase the operation, which is for sale. Notably, not one of us expressed a desire to change a thing – no installing a professional kitchen or high-speed cable or updating the rustic cabins with plumbing or homogenous décor. Scottish Lakes High Camp isn’t fancy, but I’ll take charming over fancy any day. //

Janelle McCabe wrote in December about the experiences of a Spokane-based Team USA staff member at the Rio Paralympic games.