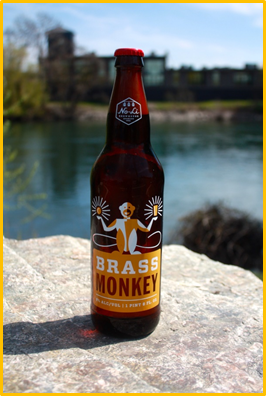 If the Beastie Boys was the first thing you thought about when you read the title of this beer, you’re not alone. It was a single released from their first album, “Licensed to Ill,” and the song mentioned the poor-man’s cocktail many times in the lyrics. Quite plainly, you take a 40 of malt liquor, throw in some orange juice, and abracadabra: Brass Monkey.

Not unlike the critics that claimed the Beasties Boys were sample pirates, it appears No-Li Brewhouse is capitalizing on the citrus beer title and elevating it to beer-geek status. No-Li’s Brass Monkey doesn’t have anything in common with a 40-ounce of Mickey’s, but then again, it does have 8% ABV – some brass junkie kick.

Altogether, it’s a fairly sweet beer with the required citrus overtones. It isn’t sweet like a fruity beer; instead it’s sweet like it has the perfect balance of malt. No-Li excluded the orange juice, and combined Cascade hops plus mildly-bitter orange peel. It’s a craft beer like everything else that No-Li creates, and it tastes great.

After mowing the lawn, when the fresh-cut grass smell still lingers and you’re ready to relax, you’re ready for a Brass Monkey. It’s a seasonal beer that’s balanced, satisfying and refreshing. But pace yourself because it has been known to create some funky monkey Brass Monkey junkies. //