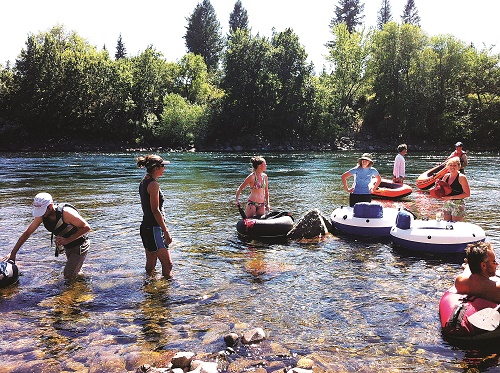 Perhaps a river might seem like just a river—a waterway connecting a lake to another river. But not the Spokane. In the new book The Spokane River edited by Paul Lindholdt, 26 essays and three poems provide an intriguing, in-depth “biography” of the river, as Lindholdt refers to the book in his Introduction. With the river as the main “character,” the anthology is organized into three sections—Encounters and Excursions; Culture, History, Society; and Beneath the Surface. History, science, ecology, and writers’ personal reflections combine to provide a fascinating holistic story of the river.

The first section contains poignant and even funny personal essays from writers such as Jess Walters and Tod Marshal. Bob Bartlett’s fly-fishing and Julie Titone’s paddling stories both amuse and educate. Throughout, but especially in section two, readers learn about the river’s earliest geologic history and about tribal history of sustenance and salmon runs for the native Spokane and other Interior Salish people, which was decimated by dam construction. Sad, ugly history of exploitation and pollution is also included.

Did you know raw sewage was dumped into the river until the 1970s, when treatment plants were finally constructed? William Stimson explains all about it. Essays by Margo Hill, a Spokane Tribe member, and Beatrice Lackaff are especially fascinating. In the book’s final section, essays by Stan Miller, Rachael Paschal Osborn, and Greg Gordon—along with “The Spokane Riverkeepers” essay co-written by Rich Eichstaedt, Bart Mihilovich, and Jerry White—share how environmental awareness and activism has led to the river’s recovery, on-going today.

Ultimately, this book provides hope. Deeper understanding cultivates fondness. By learning about the river’s complex ecosystem, toxicity, water rights conflicts, and aquifer relationship, readers will gain further respect and reverence for the Spokane River and how its health benefits us all. //