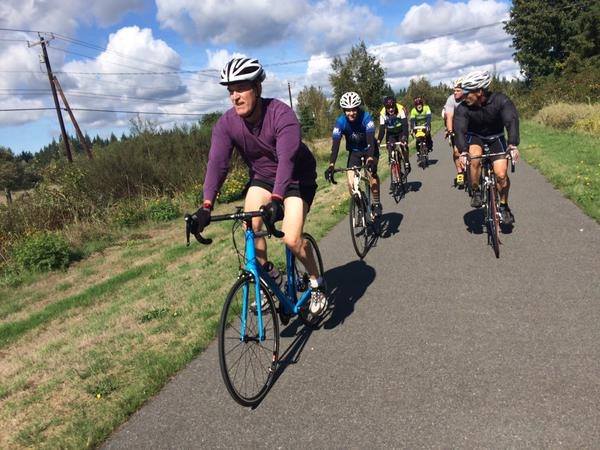 There’s a new bike club in town, and you might already be a member. Just don’t expect club rides or to see kits in their colors any time soon. This new club resulted from the merger of Cascade Bicycle Club and Washington Bikes, formerly the Bicycle Alliance of Washington. Washington Bikes has become a Cascade affiliate focused on state-wide advocacy.

The two organizations merged at the end of 2015, resulting in “the nation’s largest bike nonprofit,” says Cascade Chief Strategic Officer Barb Chamberlain, former executive director of Washington Bikes and a former Spokane Bicycle Advisory Board chair. About 50 local cyclists had their Washington Bikes memberships transferred to the 17,000 member Cascade Bicycle Club. Nearly 100 area cyclists have signed up with Cascade since the merger. Cyclists have long known Cascade for the annual Seattle to Portland ride. Chamberlain says “Cascade is redefining its mission to be statewide, but we don’t entirely know what that looks like yet. We don’t have plans for a chapter model as such; it’s something for us to consider based on interest from members around the state.” Hank Greer, OTM’s Everyday Cyclist columnist, says “Advocacy is a given.” But, he adds, “If Cascade doesn’t expand events to the east side, will it appear to be west-centric?”

Garry Kehr, past-president of the Spokane Bicycle Club, participated in the merger discussions and sees no concerns. “Cascade will become a statewide force in bicycle education, advocating for youth cycling programs and otherwise promoting the benefits of cycling across the state,” he says. “I believe the whole state will benefit.” One benefit for sure is the renewed emphasis on developing the John Wayne Trail.

For those who purchase cycling license plates, the portion of the fee that previously went to Washington Bikes will go to Cascade to fund statewide cycling advocacy and safety education. “The merger will absolutely be carried out in partnership with local groups in ways that make overall bike advocacy stronger,” Chamberlain adds. //