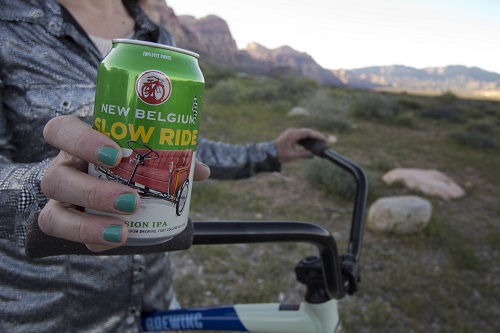 After a long day, a cool Slow Ride IPA is one of the best ways to unwind.

Slow Ride by New Belgium Brewing takes a detour from all of the bitter and hoppy IPAs on the market. This mellow IPA collaborates with big citrus aromas and a lingering malty flavor. New Belgium blended four hops to create a drinkable American IPA with a slightly lower alcohol content. Quite frankly, it looks slightly darker than a Corona, but tastes fifty times better.

The genesis of the Slow Ride taps into the New Belgium signature beer, the Fat Tire Amber Ale. New Belgium has a history of art-inspired beers, and they’re certainly proud of the Tour de Fat bike parade. While some critics might suggest the Slow Ride is weak, in reality, the Slow Ride is subtle. This is not a chocolate stout or imperial IPA. Instead, the Slow Ride delivers drinkable India Pale Ale that synchronizes with its pale ale name.

When you’re ready to slow down, kick back, and unwind, then you’re ready for a Slow Ride. The stats are sweet and simple: ABV = 4.5%, IBU = 40 (a measure of bitterness). Cans or bottles, this is the go-to beer when the pavement is sizzling. Doesn’t matter if you have a bike or not, a Slow Ride is a smooth and peaceful way to kick back and relax.