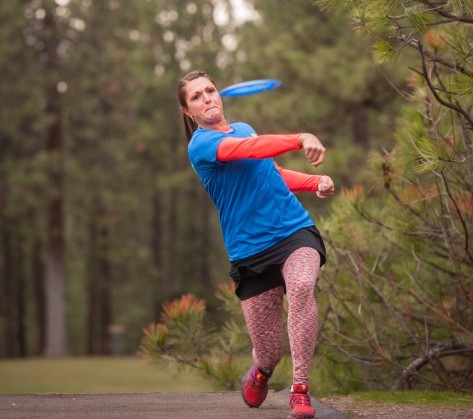 Spokane’s Shawna Buzzingham, already a world class disc golf player, continues to rise through the ranks – she is earning her way, she is gritty and ambitious and is just as determined to share the fun as she is to win.

“I started disc golfing eight years ago,” says Buzzingham, “and have been competitive since 2009. I’m sponsored by Team General Store, Team High Country, and as of this month, I’ve been sponsored by the number-one leader in disc sports, drumroll, Discraft!” She notes that Discraft, a company that produces discs and other disc golf gear, has been on the front lines of disc golf since the sport first started getting popular in 1978.

“It’s a very exciting time for me. I’m quitting my day job for the summer and going on tour. I will be competing in several National Tour events, as well as some Majors, and most importantly, Worlds in Pittsburgh,” Buzzingham says. Her new status isn’t exactly a cakewalk –often tournament disc golfers pay their own traveling expenses, sleep on the couches of their extended disc golf family when far from home; and, by the way, sponsors only pay when you win.

Buzzingham is more than just a great disc golfer – she has pushed herself at every opportunity to get there. For example, last year, while playing a huge tournament in Portland, she managed to keep her focus even while being attacked by bees. She still came in as the 25th best woman disc golfer in the world.

Another example of Buzzingham’s grit is the way she first came to the attention of her major sponsor, Discraft. She remembers thinking that the sport of disc golf was blowing up and that a player would just fall into the haystack with all the rest without self-promotion. So, she built an online disc golf presence for herself. Then, one of her new online community of friends turned out to be a team captain for Discraft who soon invited her to join their team.

Buzzingham’s enthusiasm for the sport goes way beyond her personal success – she wants everyone to know that if they aren’t already out there rattling those basket chains, then, they could be having a whole lot more healthy outdoor fun. There are no excuses, she says: old or young, athletic or not, rich or poor, even folks with special needs, can all get out under the trees on the disc golf courses and have a fun game right along with the best of them.

“Tournament events are coming up in Spokane,” Buzzingham says. “On May 22 and 23, the Four Mounds Disc Golf Reserve will be hosting The Lilac City Open A-Tier event. It attracts players from all over the U.S., and sometimes the world!” Buzzingham and her friends will be there huckin’ em. //