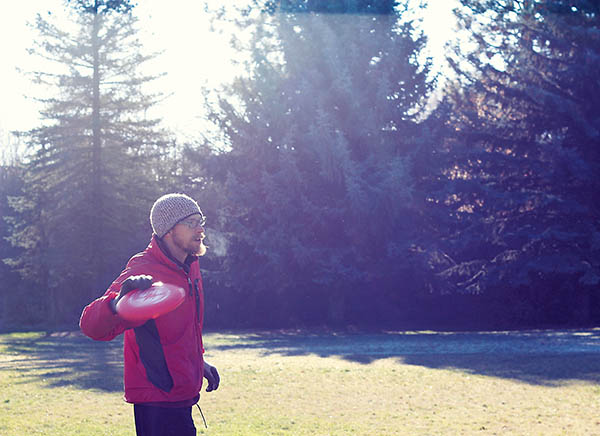 Every Sunday morning without fail, a hodgepodge of experienced players and newbies gathers to play Ultimate Frisbee at Wentel Grant Park in Vinegar Flats. Neither knee-deep snow nor Christmas falling on a Sunday is cause to cancel a game. Sometimes when it’s particularly heinous outside, only a few people show, but even then, they’ll toss the disc until they lose feeling in all their toes. “We have not missed a Sunday for about five and a half years,” says Jim Schrock, the group’s organizer. “We’ve played with a foot or more of snow, raining, strong wind, and hundred-degree weather.”

It doesn’t take a snow-dusted mountain to get a great winter workout. Whether you can’t make the time to spend weekends on the slopes, don’t have the budget, or just don’t dig barreling downhill with your feet strapped to sticks, the Inland Northwest offers plenty of other ways to stay fit during winter.

Newbies and pros can play side by side in Ultimate Frisbee, a no-contact team sport that doubles as your speed workout for the week. Not to be confused with disc golf, ultimate frisbee is played on a field and somewhat resembles soccer. Several pick-up ultimate frisbee groups play year-round. A lunchtime group plays weekdays near downtown Spokane at Glover Field whenever enough players opt in. Sunday afternoons, a more competitive crowd plays at Franklin Park on the north side.

Unlike most other sports involving frozen water, ice skating requires little contact with the cold. Plus, it’s cheap and makes you feel like you’re in a romantic comedy. An hour on the ice will leave your cheeks rosy and your quads burning. Several local ice rinks offer onsite skate rentals and open skate hours for under $10 per person. Take a beginner’s course to master the art of not falling and perhaps a few fancy moves.

Not only does giant shuffleboard on ice exist, but it’s also an Olympic sport that’s seen a local resurgence in recent years. Lilac City Curling Club has tentative plans to play its final season at Riverfront Park’s Ice Palace before park renovation forces the club to find new ice. Join with friends as a way to earn pre- or post-game beers. Similarly, indoor soccer makes for a great pretext for socializing with friends. Spokane Soccer Center breaks teams into ranked categories, so newcomers can rest assured they won’t be pummeled every time. Spokane Youth Sports Association offers drop-in games for women and men aged 50+.