If You Pave It, They Will Come 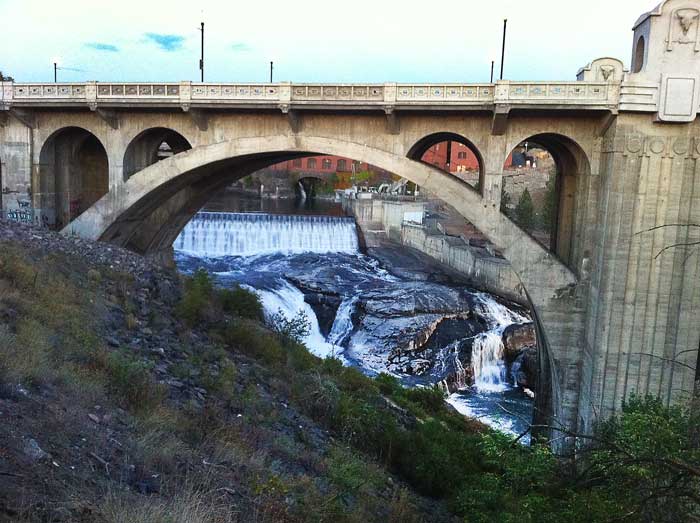 It’s been surreal these past few weeks to walk along the north  rim overlooking the Spokane River downstream from Riverfront Park. We live and publish OTM a few blocks away in the West Central neighborhood, and the trails and parkland along the river corridor are our regular stomping grounds. But the new ribbon of smooth Centennial Trail pavement that was recently laid down between the new Kendall Yards development and the bluff, with bare dirt, bunchgrass, and construction activity occupying its flanks, is an incredible sight to see. It makes me think of the Yellow Brick Road in the Wizard of Oz; it looks strangely out of place, yet beckons you to go skipping (or walking or running) down the narrow strip just to see where it goes.

This new Spokane River Gorge leg of the Centennial Trail is already transforming the surrounding area. There are more walkers, runners, and cyclists out there exploring it now than I’ve seen in this traditionally isolated corner of the city over the past several years combined.  The trail expansion has also created a vital link between Riverfront Park, the downtown core, and long neglected parkland along the river and the confluence with Latah Creek to the west. Connectivity is key to making the most out of our treasure trove of parks, conservation areas, trails, and other public lands in Spokane and throughout the region. Often times it’s largely mental, but a safe and inviting paved trail will draw people in to explore nearby parkland and trails so much more than a series of un-signed, potentially sketchy neighborhood roads or a field of weeds. Go figure.

I for one am happy to share our neighborhood with the rest of you nature loving, recreating tax payers and hope that more of you take the time this fall to explore the newest addition to the Centennial Trail. If you’re looking for the perfect tour of the area, our Spokane urban hike suggestion on page 13 is a fantastic loop hike tour of the Spokane River Gorge. I only have a couple things to ask of you while you’re out there enjoying the surprisingly pristine river habitats and amazing views of the river canyon and downtown.  1. Go off-route a little and explore adjacent city park land on both sides of Sandifur Bridge, including the People’s Park and the High Bridge/Overlook Park areas, which need more public attention. And 2., bring a garbage bag along with you to help pick up the slow accumulation of trash that will no doubt build up after this year’s Spokane River Cleanup (Sept 28). After your hike, post a photo of yourself out on the trail on our Out There Monthly Facebook page by October 11, and we’ll enter you to win two tickets to the Radical Reels Film Festival the following night (see page 11 for details). See you out on the trail!