How to Write about Bikes and Cars 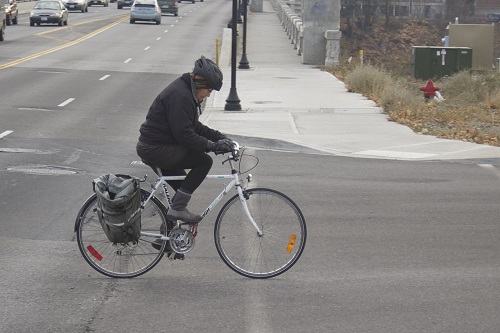 As a cyclist and a motorist who is also a teacher of writing, I can’t help but notice two rather curious things about how newspapers write up bike-car accidents. Take, for instance, the following, from the Spokesman Review: “A man in his 60s was hit by an SUV while riding a bicycle at North Columbia Circle and North Park Boulevard near Downriver Golf Course around 4 p.m. Monday,” (May 28, 2012).

First, this is the passive voice. Rather than, “An SUV hit a man in his 60s riding a bicycle,” the word order is swapped so that we read that the cyclist was hit by an SUV. And second, isn’t it strange that a cyclist was hit by an SUV? Not strange in that it is out of the ordinary, but strange for the word choice – a cyclist is a person, the SUV is an inanimate object. These two words are not on equal terms with each other. One is a human, flesh and blood; the other a machine, a mass of metal and plastic.

To avoid singling out the Spokesman, here are a few more examples. (They are everywhere once you start looking for them.) From the Oregonian: “Tualatin Valley Fire & Rescue said a cyclist was struck by a car in Tigard and taken to the hospital with some bleeding from his head, around 3 p.m.,” (July 2, 2013). From the Seattle Post-Intelligencer: “Seattle Police say a woman on a bicycle died Friday morning after being hit by a large truck in downtown Seattle,” (August 29, 2014). From the Bellingham Herald: “Tim Johnson, 47, was riding in the bike lane in the 3400 block on Northwest Avenue just before 5 p.m., when he was hit by a turning truck,” (March 14, 2014).

I do not want to make any claims as to whether cyclists have a right to the road, or whether cyclists or motorists cause more accidents, or who was at fault in the examples I’ve cited. I want to set those issues aside for a moment and think about language. Whenever we write or speak a sentence, we make decisions about how to represent the world we see. In the names we use for things, in the words we use to describe those things, we write a version of the world. Language represents, shapes, and even constructs reality.

These accounts we’ve all read numerous times have a grammar that absolves the motorist of responsibility. Indeed, the motorist is not even present in the sentence, replaced by a driverless SUV that goes about hitting cyclists. What if these stories were rewritten in the active voice and with parallel terms for cyclist and motorist – what if we saw the headline, “Motorist hit cyclist” instead of the all-too-familiar “Cyclist hit by SUV”?

Consider the following, from the Associated Press reporting on an event in Anaheim: “A bicyclist was struck and killed by a car moving so fast that his friends didn’t know what happened, and his body apparently was carried on the car for 13 miles,” (August 24, 1999). This story, like the others I’ve cited, is tragic. Here’s a rewrite: “A motorist struck and killed a bicyclist. The motorist carried the bicyclist’s body on the car for 13 miles. The motorist was driving so fast witnesses didn’t know what happened.” There’s a very different story told in that rewrite than in the original. My revision, clearly, has its problems, but in rewriting the sentence, we can see the shared difficulty both the original and the rewrite face: that of trying to figure out how to tell a story. I am not a journalist, and it could very well be that there is some house style that governs how these stories are written up. Still, I wonder if there might be a better way.