How to Avoid Bears 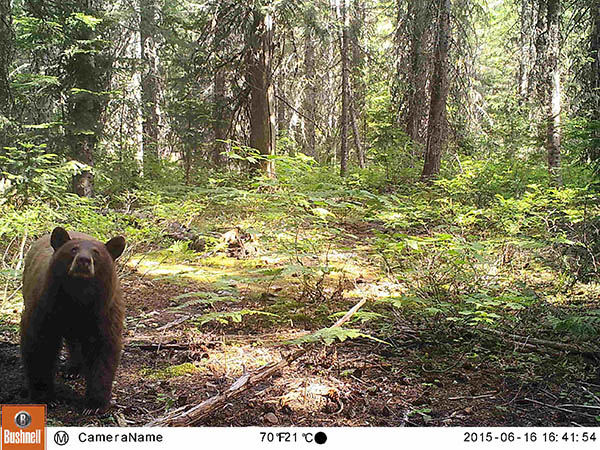 The bears in the Inland Northwest usually keep to themselves high in the mountains, but this summer was hot, which meant the huckleberries expired more quickly than normal. Widespread fires have also pushed the animals out of their normal territory.

One recent evening right at sunset, I was out hiking the Syringa Trail a stone’s-throw from Sandpoint’s city limits. There was still light on the horizon, but in the trees it was dusky, difficult to make out details. Thanks to my new intrigue with MovNat (a lifestyle and physical education system of natural movement), I was barefoot, padding along through the dust in my bare feet, wearing nothing but a sports bra and a pair of yoga shorts – just like a primitive human in the wild, if you squinted really hard.

I was rounding a left-sweeping bend when I heard something heavy in the underbrush and stopped. I saw something black, an inky blob between the trees – a bear? A stump? And then it moved, crunching along in profile so that its bulky shape, long muzzle and rounded ears were obvious. 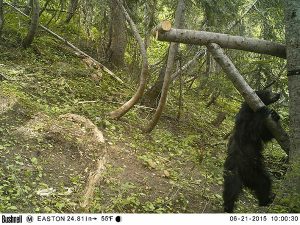 I knew what to do in theory: Do Not Panic. Next step: Back away slowly. However, thanks to the sweep of the trail, going up or down meant moving closer to the bear. Next Step: Make noise. Alert it to my presence, in case it hasn’t noticed my very-obvious, hot-human smell, and it will probably leave. So I called out into the darkness, and, indeed, it started to move. Only, I was pretty sure it was starting to move in my direction. So I backed away into the underbrush, and then I turned and wiggled through a thicket in the hope that a fat bear would be less likely to choose this path. I was thinking MovNat! MovNat! What did I learn in MovNat? I could hear a large animal in the underbrush, closer than before.

I’d been scoping out the terrain for an easy tree to climb, and finally spotted one. It had fallen ramp-like between a cluster of small pines, and it was still heavily frilled with branches. The perfect MovNat tree, just like 10 others I’d practiced climbing up this month. Bears also climb trees, but they may not want to climb MovNat trees, I reasoned. Mostly, the tree offered a nice vantage point and a nice place to start making copious amounts of noise. Such as my Sub-Saharan yodel, a high-pitched, authoritative vibrato that has no doubt been used to strike fear into the hearts of large predators for millennia. Or at least that’s what I was telling myself. 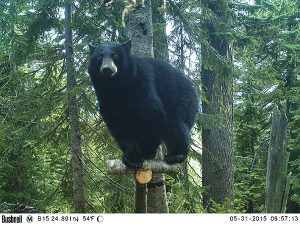 After 10 minutes, I reassessed my situation. It was pretty obvious I was not going to be rescued by other hikers, and it was getting darker all the time. Soon it would be too dark to find the trail again. I briefly considered staying in the tree all night. Very briefly. That seemed like the least safe option, really. And I hadn’t heard any new bear noises.

It was up to me to rescue myself, so I climbed down yodeling fiercely, trying to avoid pokey things in the dark. In this I was unsuccessful, and my bare feet retained a number of prickles. After only five minutes of searching, I found the trail again, and I marched along, chanting, yelling, puffing myself up like a near-naked peacock. 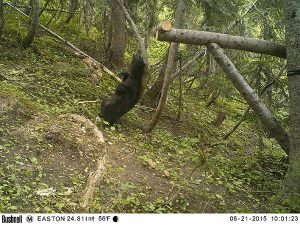 By this time it was so dark that I could see almost nothing. I imagined bears all around me, although I was pretty sure I’d hear them. As I’d discovered, bears are not silent, not even a little bit. //