Harold Balazs and The Art of Nature 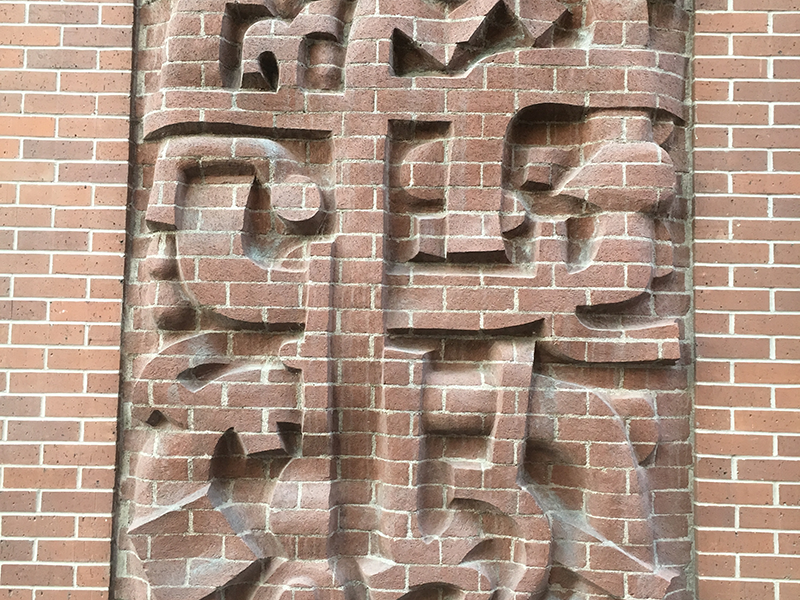 Harold Balazs has worked in Spokane for 70 years, creating whimsical, intriguing, and often confounding works of art. They range from large-scale public displays to private commissions in the form of giant doors, tiny address numbers, enamel murals, scores of liturgical art for area churches, plus the more traditional jewelry, watercolors, and enamels. It’s safe to say he’s worked with every conceivable medium. He even hand built two wood sailboats, which allowed him to master woodworking.

With the assistance of his wife Rosemary since they met at Comstock Pool in 1947, and the help of his grandkids in recent years, Balazs has graced our homes, colleges, offices, churches, and parks, leaving a trail of beauty as surprising as it is strange. His work runs through cities and towns across the northwest, and reaches further afield in Alaska, Pennsylvania, and his native Ohio. It includes temporary sculptures, too, like a forty-foot driftwood tower assembled by students on Desolation Sound, soon destroyed by the tsunami from the 1964 Alaska earthquake. And there’s the impromptu driftwood totem erected on the shore of Priest Lake with fellow artists, an undertaking fueled by home brew and christened The “Great God Damn.”

His style resists classification, but it certainly has elements of abstract art. One of the common themes is a kind of made-up iconography, a take on the ancient cuneiform language, where one letter or symbol signifies one idea. Yet Harold’s twisty symbol-letters cannot be decoded. They are products of his imagination, fused together into fantastical monuments bursting with energy like unruly, tangled vines. Look at his famous concrete lantern, Opera Tower, behind the INB performing arts center: four sides of cast concrete “Haroldology” rise up thirty-two feet, the corners expertly notched together like a log house.

That was the sculpture that nearly crushed him. During installation in 1974 he tried to stop a section from blowing over in a wind gust—he saved it, but crushed three vertebrae in the process. During the many weeks of convalescence he took to watercolor and painted squashes in their garden. With his artist friends and their easels, they sketched and painted the verdant chaos of vegetation in solidarity.

Throughout his life Balazs has taken inspiration and solace in nature. His relationship with the outdoors started in his depression-era Midwest childhood, where he worked the strawberry harvest, earning 12 cents a quart; at the seven-acre homestead in Mead; or on trips to Alaska, where he installed over two dozen public artworks over a ten year period as part of Alaska’s Percent for Art, making time for side forays to hunt caribou with artist friends Ken Spiering and Mel McCuddin.

“Except for brief periods, such as college,” Balazs explains, “I’ve always lived on a farm.” This close proximity with nature informs Balazs’s distinct style and flows out of it, mostly in a subconscious way. In his aptly-titled enamels, “Birds of the Northwest” and “Northwest Wildflowers,” which are located on the Lincoln Building at 818 West Riverside, one pastoral scene explodes with irises, rhododendrons, and daisies, and the other one explodes with birds—soaring swallows, owls, and goldfinches caught in vibrant colors as pure as the day they were created back in 1981. In fact, there’s so much going on visually in all his work, and the pieces are scattered around town in so many unexpected places, that it’s best to simply experience his art instead of analyzing it—much as one would a national park.

“Nature is seen in most of his work,” says Blair Williams, owner of Art Spirit Gallery in Coeur d’Alene’s where Balazs has shown his work since 1997. “His public sculptures are literally in nature, like the one floating in the [Spokane] River. In that way, they all tie together.” His work fits the city well, since Spokane is infused with so much nature and art— riparian greenbelts running throughout, public art on many a corner, and murals beautifying many an overpass.

One of my favorite pieces is the Rotary Fountain, built in 2005, which is arguably the most interactive of his public pieces. (The fountain is currently undergoing a million dollar repair.) Spokanites love running under that halo of cascading water or watching much braver folks play while basking in the sunlight slicing through the mist. It’s crowned by a garland of Balazsian squiggles that frame jets of water converging in the torrential middle. The stainless steel basalt columns are almost indistinguishable from the real thing, echoing the bedrock beneath our feet.

At the heart of his style glows a fearless fascination with our world and all the wonder and mystery we constantly stumble upon. “I’m interested in everything,” Balazs still proclaims, as he ardently has for all the past 89 years. And that’s because everything is interesting, to him, and ought to be to more of us, perhaps.

The materials we all tread upon are hallowed: dirt and water are molded into clay, pigments from minerals we mine are ground and mixed with oils to render images and feelings. The key is to never stop making things and, Balazs insists, not to think too much. He says most days he’s still out tooling around his workshop, assembling small sculptures from the odds and ends he’s gathered in a lifetime dedicated to the arts.

Other Places to Find His Work

Finding every sculpture in and around Spokane will take you on a whirlwind but worthwhile outing. You’ll encounter friezes hidden in plain sight—the cast concrete facade of Hennessey Funeral Home on Division, a giant Tree of Life unfurling curlicue leaves arching across the entry; or carved into the brick walls of Century Link’s downtown office and the Wheatland Bank on Wall Street’s pedestrian mall. A mural at 4th and Sunset depicts Balazs’s legacy, capturing his vivid style and emphasis on wonder.