Good, Better, Best: What MTB Wheel Size is Right For You?

If you ride off-road, you have likely been bombarded with every possible opinion on what mountain bike wheel size you should be riding. Allow me to add one more perspective to this debate that will help you be as industry savvy as I claim to be.

Let me begin with asking you to consider the nature of the question: Is 26”, 650b/27.5 (650b is the French sizing system equivalent to 27.5”) or 29” the best mountain bike wheel size? Honestly, this is a stupid question that deserves a stupid answer. Bicycle manufacturers and magazines will trip all over themselves to tell you they have the perfect bike for you. But these kinds of claims only stir up disagreement in the name of selling you something that doesn’t exist – there isn’t one bike that does everything. After all, and let’s be honest, we all crave another bike, and the ideal situation may be one 29” bike with 100mm of travel and another with 160mm. But realistically, it’s two different bikes.

Was the 26” wheel standard all that awful? Are 29ers that much faster? Is there really a good compromise between the two? You’ve probably heard as many opinions as shops you’ve visited. It could be simply because many employees have yet to ride something other than 26” wheels, or because the brands they offer haven’t jumped on the “tweener” bandwagon. Looking back on the last 15 years of working in the industry, none of my 20 plus coworkers have owned a 650b, and fewer than half had a 29er. Sadly, not all shop employees even own a mountain bike. (We may get some great deals on products, but not all of us make enough to buy multiple bikes.)

Try to think of bicycle innovation with this phrase in mind: “One doesn’t know better until one has owned better.” Better for me came about eight years ago when I was given a demo 29er. Although the wheel size has been around for several decades, this was a scary revelation in efficiency and rollability (the ability to roll with increased traction and the lack of resistance). This was early in the major manufacturer’s timeline of bicycle production, so the bike felt like a limo. For all those who still believe the 29er is a lengthy, switchback-sucking slug, you’re flat out wrong. I won’t argue that 29ers feel bigger than your old, narrow bar, 1.95 tire, quill-stem classic. With greater traction, I could climb like never before, and a lower angle of approach made it so much smoother.

The 650b/27.5” wheel size has seemed to attract the most opinionated group of mountain bikers. When I first rode 650b (with 5 inches of travel) several years ago, I did a 50-mile ride on it for good measure. It felt great, but I didn’t feel a worthwhile difference between that wheel and a 26 inch. When I talk with cyclists who insist their riding style warrants a wheel larger than 26 inches and smaller than a 29er, my ears perk up. Most seem to defend their decision like they’re still trying to convince themselves. I now make it a habit to ask them about their motivations for buying a 650b, mainly to get them fired up and really thinking about it. There are three main reasons I’ve heard over and over the last couple of years that I can understand: 1) I want to be efficient like a 29er but nimble like a 26 inch; 2) I want more travel than a 29er can offer; 3) I’m not tall enough for a 29er. (Height is only a valid argument if you require a stand-over height lower than an XS 29er frame can offer).

So, despite my opinion and experiences, I still think I will continue to suggest that the best solution is to buy different bikes for different styles of riding. Why not? Owning just one more bike won’t kill you. That is until your significant other finds out. // 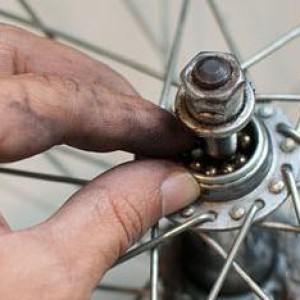 Facebook
Twitter
PrevPreviousBest of Both Seasons
NextThe Evans Brothers: For the Love of Coffee (and the Great Outdoors)Next