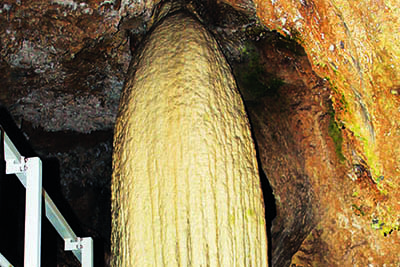 On average, July is the warmest month in Spokane. So what if I told you that you could go on a hike where you were guaranteed to experience 39 degrees Fahrenheit, even on the hottest July day? When the local daytime highs drain your energy for hiking and you long for the chance to don a jacket once more, pack your jacket for a road trip to Crawford State Park.

William Crawford, for whom the state park is named, won the land in a poker game in 1921 and later turned it over to the Washington State Parks system. The park consists of several covered picnic areas constructed by the Civilian Conservation Corps in the 1930s, so pack a picnic and plan your trip to coincide with a tour of Gardner Cave.

Discovered around 1899 by Ed Gardner, the cave is the third longest limestone cave in Washington. Gardner literally stumbled upon the entrance while riding his horse, and he realized it was an excellent place to hide the goods of his thriving bootleg business. The caves were not developed as a tourist destination until 1950, and the most recent renovations took place in 1977. The park is open from 9 a.m. to 6 p.m., Thursday through Monday each week, with guided cave tours at 10 a.m., noon, 2 p.m., and 4 p.m. Aside from a Washington State Parks Discover Pass (one per vehicle), there is no fee for the cave tour. 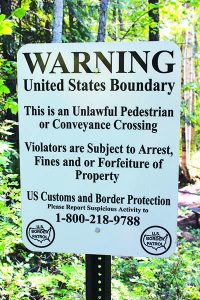 Carry a jacket for the initial 200-foot climb up a paved walkway to the cave entrance, where the tour guide begins the history of the cave, both human and geologic. Put your jacket on before entering the cave for the hour-long tour, where formations include stalactites, stalagmites, and a large column, with several named formations along the descent to the bottom of the cave’s viewing platform. Favorites include “Roast Turkey,” “Fried Eggs,” “Queen’s Throne,” “The Frog,” and “Pet Lizard.” It’s a good idea to take a headlamp. The cave is 1,055 feet long, although the viewing platform only extends the first 494 feet. At platform’s end, you’ll be standing 90 feet below the earth’s surface. If everyone in the group agrees to it, the tour guide will turn off the lights so everyone can experience the natural dark within the depths of the cave.

Once the tour is over, consider adding the quarter-mile walk to the international boundary with Canada. It’s sure to warm you up again before returning to the parking lot; just don’t step over the border swath! Round-trip distance: approximately 1 mile.

From Spokane, take U.S. Highway 2 north. Just past the Pend Oreille County line turn northwest for WA-211 toward Usk. Just before Usk, join Highway 20 north to Tiger, following the Pend Oreille River. At Tiger, continue north on WA-31 to Metaline. Just north of Metaline, turn west on Boundary Road and follow the signs to Crawford State Park. Discover Pass required. Call ahead to schedule large groups: 509-446-4065. For visitor safety, no flip-flops or high-heeled shoes are allowed inside the cave. No eating or drinking are allowed inside the cave, and pets are prohibited. //

Give back to our local trails

Holly Weiler is an avid trail runner, backpacker, and hiker. She wrote about winter camping in January.