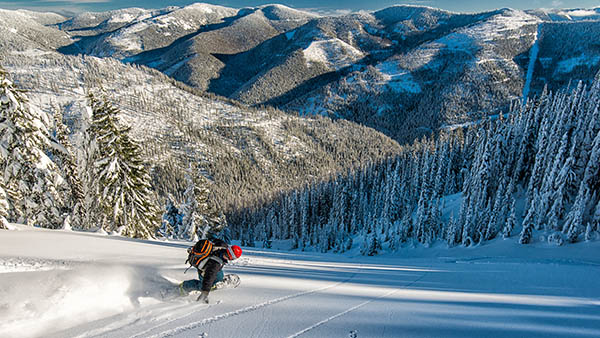 Dudley Improta, an avalanche specialist with the West Central Montana Avalanche Foundation (WCMAC), carefully digs a pit on a finger ridge, high on the slopes of Morrell Mountain, in the Swan Range east of Seeley Lake. He uses the blade of his aluminum shovel to shave the sides, isolating a cross-section of the snow as long as his shovel handle and as deep as the blade. He pokes his finger into a thin ribbon a foot below the surface, as if checking the consistency of a still-baking layer cake. He swipes at the snow with a brush, examining the layers like an archaeologist or the investigator at the scene of a crime that hasn’t happened yet. Finally, he takes the scoop of his shovel, places it atop the wall of the pit, pounds with his hand, and the top layer of snow slides off en masse.

Each year, avalanches bury about thirty skiers, snowmobilers and other backcountry enthusiasts in the U.S.; in fact, avalanches kill more people on national forest land than any other natural hazard. And with wilder winters and the increasing popularity in winter backcountry recreation, the potential for tragedy grows every year. That’s why savvy backcountry travelers swear by their local avalanche advisory—after all, it may mean the difference between life and death.

Unlike the sophisticated satellite-aided analysis of traditional weather forecasting, avalanche study requires field observation in some of the most remote, snow-choked terrain in the lower 48 states.

The hallmark techniques for snow stability are pit tests, by which avalanche specialists can assess the potential for initiation—the likelihood of a fracture occurring in a weak layer of snow—and propagation—the likelihood that a sliding upper layer will “run” across a distance. Improta, who co-founded and staffs the WCMAC with avalanche specialist Steve Karkanen, likens it to “finding the sleeping dragon.”

Like a spring-loaded bear trap, avalanches usually require a push to release their potential energy—and that push often comes from the bottom of a sled tread or a ski.

As an avalanche specialist, “you’re out enough that you see people doing interesting things or taking bigger risks than you would,” says Improta. “Their skill level is such that they can negotiate steep slopes, but their avalanche knowledge isn’t.”

But safe backcountry recreation still requires more than mere faith in a bulletin; it’s a dynamic mix of interpreting one’s surroundings and the conditions, not only of the snow but of one’s group.

“An avalanche advisory is just that—an advisory; it gives a skier or sledder a place to start,” says Improta. “Fortunately, I think a lot of people do understand that you can get good information from the advisories, but in the end you’ve got to make a call.”

Aaron Theisen is the author of the forthcoming “Day Hiking Glacier National Park and Western Montana” (Mountaineers Books). He wrote about Montana fall hikes in the October issue.