Explore Spokane With a Walking or Biking Poetry Tour

A new way to explore Spokane is with a self-guided walking or biking tour of the “I am a Town” poetry art installations. With 13 stops to choose from, using the Google Maps route provided by the non-profit organization Spokane Arts, you can link waypoints together. Most are located in the downtown vicinity, with two others on Spokane’s South Hill and another in the West Central neighborhood.

Poet Laura Read initiated the “I am a Town” project when she served as the city’s poet laureate from October 2016 to November 2017. During this time, she taught poetry workshops at Spark Central based on the same theme. “One of the goals for the project was to make poetry an actual part of our landscape, thus making poetry more accessible to everyone,” says Read. Spokane Arts administers the poet laureate program, and a Community Building Foundation $2,000 grant provided funding for supplies and design work. After 13 poems were selected (out of 60 submissions)—each one connected to a different physical space or landmark in the city—excerpts of each poem were handcrafted into professionally designed wooden stencils with unique lettering. Thanks to help from many volunteers throughout the process, all the poems were placed at their locations in June, using the stencils and washable chalk paint. 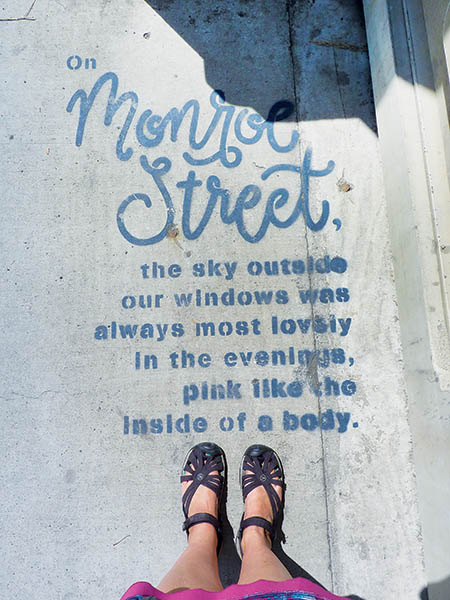 “To install the poems, we needed to secure a lot of permissions, so we are grateful to the City of Spokane, the Parks department, and each of the individual business and property owners who agreed to host a temporary poem on their property. We plan to re-install the poems as necessary through the end of summer, in case of rainstorms or poems accidentally getting washed away,” says Melissa Huggins, Spokane Arts executive director. “It’s such a lovely feeling to be surprised in your own city, especially by a fragment of poetry in an unexpected place. I love that a person walking or cycling by can read the few lines stenciled on the sidewalk and then seek out the full poem later, and they may be surprised all over again by the direction the full-length poem takes.” The Google Maps route and all the poems in their entirety are online at Spokanearts.org.

One way to begin your poetry walking or biking tour is to start at The Nest outdoor plaza in Kendall Yards, located off Summit Parkway. Find the first poem here, then head to the Monroe Street Bridge. You’ll find the next poem at the northwest end of the bridge. Continue east and cross Monroe to Riverfront Park, or turn around and get on the Centennial Trail so you don’t miss the view of the falls framed by the Monroe Street Bridge.

Next stop is Veteran’s Court Lookout in Riverfront Park—off the trail under the bridge. The poem is located near the railing overlooking the river. From here, head south of the river to find four poems located in the blocks between Lincoln and Browne Streets. This includes stops at the Crescent, nYne Bar & Bistro, Neato Burrito’s Baby Bar, and The Otis. If you return to Kendall Yards from the Otis, via Monroe Street Bridge, the route for these seven poems is a nearly 3-mile loop.

For a longer tour, find the poem along Maple Street under I-90 and another outside The Elk in Browne’s Addition—these two stops add just under two more miles to your route, for a large loop total of approximately 4.5 miles back to Kendall Yards. But you can start your tour wherever you’d like, creating your own urban trail adventure. Take time to enjoy a drink or meal at one of the bars. And as an artsy bonus, combine poetry with a tour of 10 featured public art displays in Kendall Yards and along the Centennial Trail, since you’re already in the neighborhood. (Find the art walk map at kendallyards.com.)

As for the sidewalk poetry, this tour should be done more than once and not just during summer. “In the late fall, for selected poems—depending on location—we’ll replace the bright, colorful chalk spray paint with water-activated paint, which means the poem will be invisible until it rains or someone pours water on it. Seattle and other cities have similar hidden poetry installations that only reveal themselves when water is applied,” says Huggins. “I think that will make the sense of discovering a poem even greater if, for example, you’re waiting at a bus stop, it begins to rain, and suddenly a poem appears on the sidewalk at your feet.” //

Amy McCaffree, Out There’s special section editor and Out There Kids columnist, has been writing for OTO since 2006. She also writes poetry, with works published in Whitworth’s Rock & Sling literary journal and local anthologies, including Railtown Almanac, Lilac City Fairytales, and Spokane Writes.