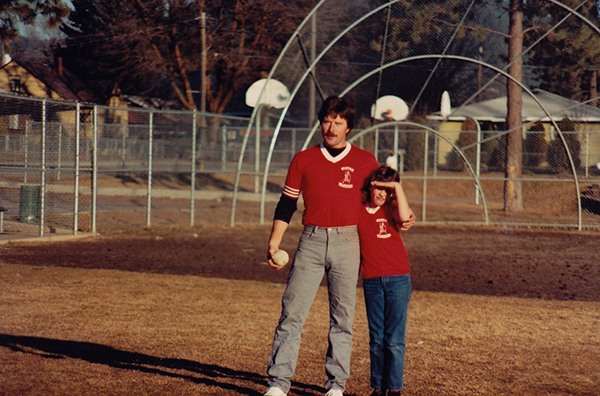 Take a look around, and it’s pretty easy to find a parent coach. Whether it’s coaching soccer, softball, basketball, or football, it seems that many of us have put on that hat, either because we were drawn to it or because there was not going to be a team if we didn’t.

My husband played competitive sports through high school, so stepping into a coaching role was easy for him. Not so much for me when I felt called to that role. I have trained in martial arts for over 20 years, yet the prospect of teaching Hapkido to my daughter was daunting. I knew from the start that I am two different people, on and off the mat, and I needed to explain this to my daughter before we started. In talking with other coaches from a variety of sports, I found the idea of wearing two hats and separating the coaching persona from the role as parent seems to be a key factor in avoiding problems.

Jarrud Watkins says that establishing those roles has been very cut and dry for him and his two kids. “At basketball, I’m the coach, and at home, I’m dad. But after almost every single practice my daughter says, ‘Thanks for coaching.’ She knows it’s a commitment and appreciates that.”

George Bryant has coached the Spokane Nordic Racing Team for 13 years. He says other times the line blurs as the relationship matures. “I think from the start I had to learn to feel where a line should be drawn. As they grew I think the line became less defined, with them asking for information outside of the training environment.”

All kids need and thrive on parent involvement and enthusiasm. But too much can have negative impacts on the parent/child relationship, says Jim Thompson of Positive Coaching Alliance. Thompsons’ non-profit is based out of Stanford University, and he encourages parents to talk to kids and find out their feelings before agreeing to coach. Thompson also agrees that separation of roles is critical.

When thinking of coaching, take your child’s personality and situation into account. Are they younger or older? What is the level of competition, and is that something appropriate for you to coach your child in? Softball coach Karen Peterson was clear on that point. “Knowing when to step back is important. Saying to yourself, ‘I don’t have the knowledge past this point and they need someone else.’”

Danielle McCulloch, a runner and triathlete, points out that with more individual sports, one solution can be pairing with other parents and coaches so that when exhaustion takes over, there is someone else to provide that extra push that might not otherwise be tolerated from a parent. Bryant agreed, “While skiing looks like an individual sport, no one gets very far without the support of other teammates, whether training, racing, or just doing team activities together.”

Most coaches agreed there is an advantage to having their child on the team. It could be extra time spent with that child, or insight into how the team works together. For more individual sports one advantage is the mimic dynamic. When your child sees you setting goals in your athletic endeavors, they have the opportunity to watch how to deal with success and failure gracefully on a personal level. McCulloch describes her son motivating himself by thinking of his dad’s completion of an Ironman race.

But it’s the disadvantages that scare most people. Relationships can be strained, and the opportunity to enjoy the same sports with your child can also be damaged. McCulloch adds, “The biggest challenge for a lot of parents is remembering how old your child is, and finding a balance between fun and advancing their technique. There’s a lot at risk if they start hating what you love.” //

Tips for Coaching Your Kids

No matter the sport, it is important to set realistic expectations for yourself and your child and keep things positive. Remember these tips when it comes to coaching your own:

Crystal lives with her husband and two children in Spokane, where she works as a copyeditor for several academic journals.