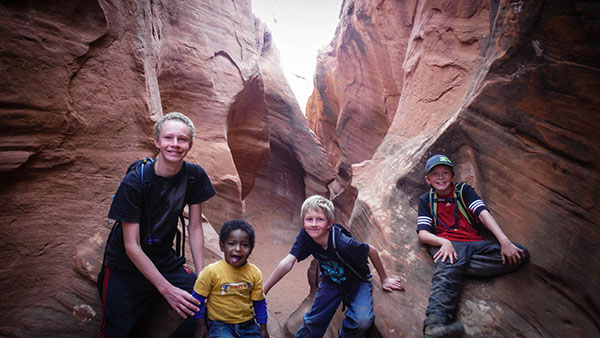 Many of my favorite memories took place in some part of our nation’s public lands—lands held in the public trust for the benefit of all citizens. I was reflecting on this just a few weeks ago as three generations of my family floated down the John Day River in central Oregon. For just a nominal fee to the governing federal agency, we floated down a wild and undammed river catching fish, navigating whitewater, and sleeping under the stars. The freedom to go and do as we pleased over many miles of rugged landscapes was just the latest adventure that was made possible by having access to public land.

Thinking back over the past few years, I can remember rafting down the Salmon River Gorge with a troop of Boy Scouts and introducing them to the world of multi-day rafting on BLM land. I can recall my two oldest sons catching their first trout on a fly in the Challis National Forest. I can remember squeezing through the narrow, tortured, yet exquisitely beautiful slot canyons of Grand Staircase Escalante National Monument. Some of my sons learned to raft on the Grande Ronde of Oregon, which was designated a National Wild and Scenic River to preserve its natural qualities. Many a camping or hiking trip has been conducted solely on the vast tracts of our National Forests, and a lot of the protein we feed our family has come from national wildlife refuges and designated wilderness areas scattered throughout the West.

Before the advent of the United States and its system of public land access, such pleasures were reserved mostly for kings and noblemen. The idea of reserving vast tracks of land for the enjoyment and pleasure of all citizens is an idea that is fundamentally American, and it is a legacy that has been handed to us by men like Theodore Roosevelt, Gifford Pinchot, John Muir, and their peers. In some other parts of the world, only the wealthy have access to wild places. Here we own over 600 million acres in the public estate, with some in every state. The vast majority of it is out west, but it still belongs to every citizen of these United States. Anyone can hike, camp, backpack, hunt, fish, bike, horseback ride, and raft in these areas, and every citizen of the United States, no matter how modest of means, is now landed gentry. They are wealthy landowners, titleholders to the largest piece of public real estate in the world.

Unfortunately, there are movements afoot to diminish, discard, sell or transfer these lands to private interests or land boards. Yet, by the mandate of state constitutions, these land boards do not manage lands for multiple use or for conservation; rather, they must manage for maximum return on investment. Most state lands were granted by the federal government at the time of statehood, and track records with these lands is a sad tale. The nonprofit conservation organization Backcountry Hunters & Anglers reports that Colorado has sold 1.6 million acres of land originally granted to it at the time of statehood. Idaho has sold 1.2 million and continues to auction land today. New Mexico has disposed of 4 million acres that once belonged to its citizens, and Oregon and Utah have disposed of 2.6 and 4.1 million acres respectively. Nevada has the worst track record, selling off over 99% of its original holdings. These places are closed off forever.

Our public lands are a rich natural heritage handed down to us by visionary Americans of generations past. They are held in trust by the citizens of the United States for the benefit of the common person and managed for wise multiple use. Adversaries deftly refer to them as “federal lands” to direct attention away from the truth that they are, in fact, public lands—owned by you and me for the improvement of our quality of life. If we want to ensure that our children and future generations of Americans will have access to these lands to enjoy and benefit from them, then we need to be diligent in protecting them from the latest land grab schemes in whatever form they appear.