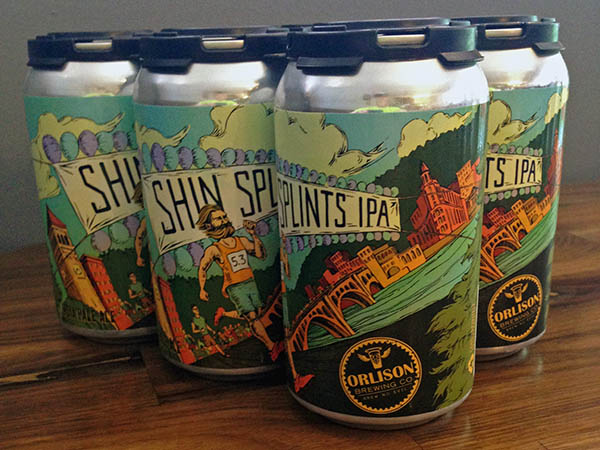 Shin splints is a catch-all term for lower leg pain that occurs below the knee either on the front outside part of the leg or the inside of the leg. These splints are the bane of many runners, and they often plague beginning runners who do not build their training mileage gradually enough. Shin Splints IPA is the newest beer from Orlison Brewing, as well as a humorous jab at Spokane’s great running community.

Kristen Silver, Operations Manager at Orlison, says, “We knew we wanted it to be something that had local meaning and with the long running tradition here in Spokane, a running-themed beer became our number one goal. The brewery has a group of runners, so we started throwing out names and Shin Splints just stuck. Not only did it make us laugh, it is something that every runner has dealt with at one point or another, so it’s recognizable.”

Traditionally, Orlison focused on lagers, so the IPA is a mild departure from their family of beers. Inspired by the German tradition of the Reinheitsgebot, the Shin Splints is brewed using Pale, Munich, and Vienna Malts, giving it a subtle ‘fresh bread’ characteristic. The addition of Perle and Amarillo hops creates notes of spicy grapefruit without a tart aftertaste. The 65 IBU is fairly modest among Spokane IPAs, and the 5.3 ABV ensures it’s not too strong to have a couple Shin Splints following a training run on the Centennial Trail.

After its initial unveiling of the beer at the Orlison taproom, the Shin Splints IPA made an appearance at the Flying Irish running club for four weeks. More than one runner has noted that the runner on the can looks a little like Gordy Ansleigh, famous for creating the Western States 100 mile Endurance Run. For a brewery founded on the motto Brew No Evil, I believe everyone would agree this is the only Shin Splints anyone would ever want. Orlisonbrewing.com//