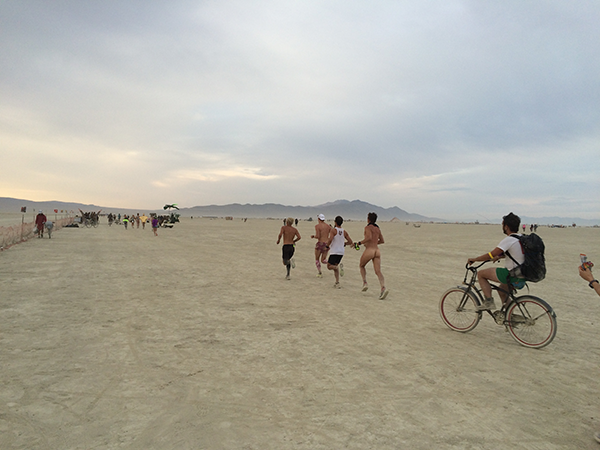 Picture an XY line graph. The X axis is labeled “Runner Extremes,” and the Y axis is labeled “Cultural Extremes.” Plot an intersection point at the far ends of each axis, and you have the Burning Man 50K Ultramarathon, which I chose as my first foray into ultrarunning.

At the end of every summer, 70,000 people from all over the world descend upon the desolate salt flats of the Black Rock Desert in northeastern Nevada. They create Black Rock City, a temporary civilization that, for the eight days of Burning Man, becomes Nevada’s third-largest city. Burning Man attracts a decidedly counterculture, nontraditional, free-spirited personality type, the kind who finds the event’s “10 Principles” (radical inclusion, gifting, decommodification, radical self-reliance, radical self-expression, communal effort, civic responsibility, leaving no trace, participation, and immediacy) pretty natural to practice and preach – at least for a week.

Running on the playa is like running on the set of Mad Max. Fine playa dust covers everything, thanks in part to the frequent desert winds, so that no matter what one’s skin or hair color is, everyone ends up the same shade of head-to-toe taupe. In addition, the enthusiastic costume culture at Burning Man creates a post-apocalyptic-steampunk meets Halloween-costume-stash aesthetic, which just adds to the creative and logistical challenge of running in the desert. Once you’ve run long enough to raise your heart rate, breathing on the playa is similar to when you accidentally inhale powdered sugar, except it’s not tasty.

In the “default world” (i.e., where burners spend the other 51 weeks each year), lube is a runner’s best friend. At Burning Man, vinegar replaces lube as the go-to substance, neutralizing the alkaline dust and preventing “playa foot,” the chemical burn that can turn skin into cracked leather within hours. 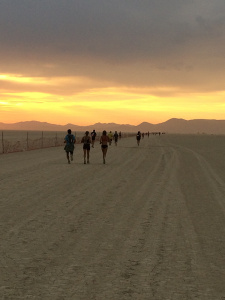 I’m camping with Pink Lightning, the folks who put on the ultramarathon and other running events. Early in the week, I ride the course on my bike alongside Cherie Yanek, founder and race director of the Burning Man 50K Ultramarathon. She talks about her experiences as a race director. She’s not reluctant exactly, but I get the idea that the exposure she’s received as a result of the race – her gift to the Burning Man community – has caused her to become wary of interviews. Yanek is a spunky little firecracker. Unsurprisingly, she’s always wearing pink, including as a hair color. She’s increasingly flighty and spontaneous and entertaining as the 50K approaches.

In addition to the ultramarathon, Pink Lightning hosts an easy 5K run, a yoga session, a 5K race, and a beer mile throughout the week. Participants in the beer mile alternate pounding a can of beer and running a quarter mile until they either pass out or complete a full mile. Being gluten free and averse to public puking, I help record finish times. One of my campmates commandeers the mic and heckles runners as they stumble into and out of the staging area.  Finishing times range from eight to 35 minutes, and it’s amusing to see perfectly sober people get completely sloshed within just a few minutes, and all before noon.

Other groups facilitate running events at Burning Man, too. The Hash House Harriers host one of their infamous Red Dress Runs. I show up ready to run along with 200 other burners in red, and it soon becomes evident that they are more interested in bar hopping than running. This is Burning Man, after all.

Another group hosts the Burning Man Triathlon, an event that welcomes 75-200 participants every year, “depending on the number of random first timers [we] entice to join in with the bullhorn,” says race co-director Ron Lane. The triathlon includes all three traditional events: “The ‘swim’ takes place in historic Lake Lahontan [which has been dry for the past 8,000 years]. The bike ride is a loop around The Man, and the run is an out-and-back around some art and cones on the playa. Each year the distances vary depending on the hangover status and ambition status of those setting up the course,” Lane says. 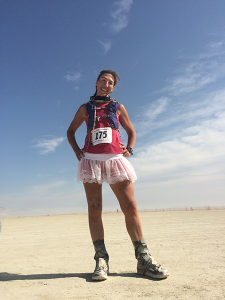 The author at mile 26, just 5 miles to go. // Photo courtesy of Janelle McCabe.

The big race starts at 5 a.m. on Tuesday — Tutu Tuesday, as it’s celebrated by burners, so many of the runners arrive dressed with various amounts of frill around their waists. It’s totally dark, but the high cloud cover overnight has kept the temps relatively warm for a pleasant 55-degree start. More than 300 runners show up with a more noticeable level of body odor than your typically starting line. Most runners wear some sort of costume befitting the host city, including their birthday suits. I’ve run the Bare Buns Fun Run enough times to know that 3 miles naked is one thing; 31 miles naked is another. That doesn’t stop at least one man from not only running nude but also covering himself entirely in silver body paint, anchoring his race bib to his nipple rings.

The race comprises four 7-mile loops plus an out-and-back at the end to bring the mileage to 31 miles, or 50 kilometers. The first loop is in the dark, so we wear headlamps. There are lots of people still out partying from the night before, and they shout in bewilderment, encouragement, and disdain as we run by. The playa surface ranges from hard, cracked, and bumpy to fine dust dunes several inches deep. The harder surfaces are preferable, because the dust does to our shoes (or in the case of some runners, bare feet) what it does to every other interior and exterior surface: It completely engulfs them. When it rains on the playa, the dust turns to clay and then hardens into crumbly rocks. When sweat mixes with playa dust, the same phenomenon occurs, which is what takes place inside my shoes. So before I start the second loop, I drop off my headlamp and pick up my gaiters after shaking the crumbles and scraping the mud out of my shoes and socks.

The sun has just risen at the start of my second loop, and it makes the whole desert floor glow a soft pink-orange. The race organizers provide two official aid stations that runners encounter every 3.5 miles on the loop course. However, pop-up aid stations begin appearing where other burners offer us drinks — sometimes water but more often booze — to help or hinder us in the Burning Man spirit. After several runners drop out, the course is noticeably less populated on the third loop, making the miles out in the deep playa especially quiet. During the fourth loop, runners’ facial expressions harden from excitement and playfulness to grit and determination. Latent running injuries become more obvious and visible, and we exchange words of encouragement as we pass each other. We’ve been spoiled by cool temps and a calm breeze throughout the race, but during the final 2.5-mile out-and-back, the temps rise and a white-out sandstorm ensues, reducing visibility to 10 feet and giving us a mighty headwind for the last mile.

The finish line is celebratory, if a bit dazed. I’m one of 160 burners who finish, with final times ranging from three and a half hours to almost 12. Since this is my first 50K, I get an automatic PR. But Burning Man ultrarunners seem to apply the same rule to their race results as the Burning Man Triathlon folks do: “All event results should be considered inaccurate, completely wrong, and purely for entertainment purposes.” I take a shot and then a solar shower and then a nap.

The Black Rock Desert is surrounded by tall, spiny hills that rise a couple thousand feet from the desert floor. As the evening sun shines its last before slipping behind the hills, coloring everything fluorescent pink and orange, the entire city breaks out in howls. The temperature immediately drops, and there’s a lull in the action as burners rest, eat dinner, and start dressing for the nighttime festivities. This moment is a great time to take your bike out on the town, which is exactly how I begin my post-race celebration. //