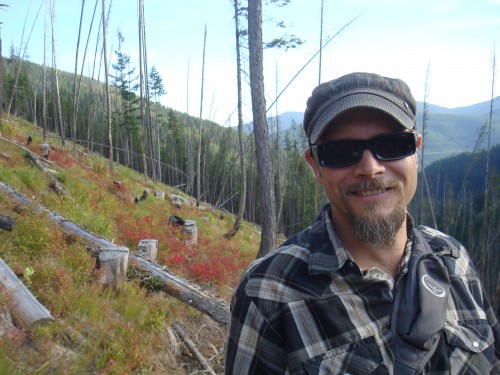 Not me. I was pretty convinced that running was some sort of sick torture deployed by angry football coaches seeking revenge for botched plays during my high school years. Throughout college, the infrequent sessions of pain and suffering were mostly self-inflicted attempts to make up for prolonged periods of winter-induced inactivity and overindulgence. As a recovering college student, my relationship with running improved slightly. But I still viewed running suspiciously at best.

I never quite got into the rhythm of a regular running practice. I would run a few miles a couple time a week for a month, then take the next 30 weeks off (like giving up was part of some training program), only to “take up” running again later in the year for another short stint. That went on, and on, and likely would have continued in perpetuity had it not been for a book.

It was late morning on the 4th of July at the Lions Campground in Rossland, B.C., and Shallan and I were sitting in our lawn chairs in the summer sun when we got to the section of Christopher McDougall’s book “Born to Run” that instantly transformed us from being pretty much anti running cynics to wary wanabees. This line summarizes the gist of what was to us a remarkable conclusion: “If you don’t think you were born to run you’re not only denying history. You’re denying who you are.”

That notion was a holy sh*t kind of moment for us. McDougall was telling us that running isn’t a form of socially acceptable torture but is actually something our bodies are made to do. I wish I could say that we were so inspired that we went out that afternoon and ran to the top of Red Mountain and back before lunch, and that running became a regular practice. But I’d be lying.

Changing the way I think about running has definitely made a difference. The random breaks between running sprees are now shorter and fewer. When I go out to run now, it’s something that feels somewhat natural, and sometimes I really enjoy it. But I still catch myself working occasional gaps into my running schedule and making mental excuses for why I should cut longer runs short. Even this is progress. Our bodies may be born to run, but my brain still has some catching up to do.