A 42- or 27-mile out-and-back bike ride along the incredibly scenic Trail of the Coeur d’Alenes through North Idaho’s Silver Valley, the Silver Valley Ride to Defeat ALS benefits the ALS Association’s Evergreen Chapter and efforts to fight Lou Gehrig’s disease (ALS). This deadly disease affects the motor neurons in a person’s brain and spinal cord and can affect anyone. Gradually, a person is robbed of the ability to walk, speak, eat and eventually breathe.

Held on the Trail of the Coeur d’Alenes – one of the most spectacular trails in the western U.S., this one-day cycling event fundraiser covers an incredibly scenic, enjoyable and well-supported course through the historic Silver Valley. Expect crewed rest stops, SAG support and a safety team. People living with ALS and their caregivers are encouraged to join the event (the trail is open to those with mobility disabilities using wheelchairs and mobility scooters). You can sign up on your own, join an existing team (details online) or form your own team. Registration is $50 ($60 on ride day), and the ALS Association encourages every rider to help raise a minimum donation of $250 that will go directly toward the ALS Association to help achieve its vision of a world without ALS (additional fundraising is encouraged, but not required). The ride kicks off Saturday morning at the Enaville Snake Pit Resort, with a continental breakfast. The 42.6 mile route starts at 9:45 a.m. and the 27.2 route gets going at 10 a.m. Both courses are out-and-back, with several restrooms and refreshment-filled rest stops along the way. A buffet BBQ lunch will be served with beverages back at the Snake Pit Resort between noon and 2 p.m. 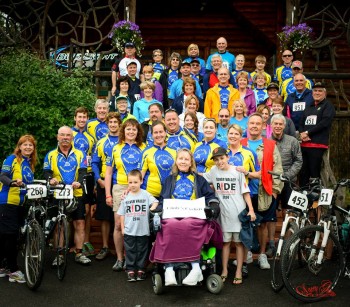 The Silver Valley Ride is one of only eight ALS Association sanctioned cycling fundraising events across the country. “Our inaugural Ride in 2014 was a great success,” said Cindy Moore, who is co-organizer of the event and serves on the Evergreen Chapter Board of Directors. “We raised more than $82,000 for local families living with ALS, and 117 cyclists participated. This year, our goal is to have 200 cyclists ride for ALS.”

Moore is no stranger to the disease, as she was diagnosed with ALS in 2010. “Most people are given only two to five years to live.” Moore said. “The neurological disease gradually paralyzes its victims, causing them to lose their ability to walk, speak, eat, and eventually breathe. Yet the person’s mind remains sharp and aware of the total paralysis that is setting in.” Moore has accepted her fate in living with ALS, but continues to work for the cause, “So it doesn’t have to be that way for future generations.” The funds raised from the Ride are used within the region to provide care services for “PALS” –Person with ALS– and their families. According to the Evergreen Chapter, more than 500 people in Idaho, Washington, Montana and Alaska are currently living with the disease.

Ride organizers are encouraging PALS to participate as well. The paved trail has options for the mobility disabled, and wheelchairs, manual assistance devices, and mobility scooters are all permitted on the Trail. “I would like to personally invite PALS to join in this event,” Moore said. “Many people registered for the Ride have no connection to ALS. The involvement of PALS will inspire them to continue to support the ALS cause.” In conjunction with the Ride, a Silent Auction and Raffle will be held. “We have autographed photos of former and current NFL players and coaches: Kellogg native Mike Hollis (Jacksonville Jaguars, Buffalo Bills and New York Giants), John Beasley (Minnesota Vikings), Peyton Manning (Denver Broncos), and Pete Carroll (coach of the Seattle Seahawks).

The registration fee is $50 through June 26 and $60 the day of the event, and includes a catered lunch provided by the Snake Pit. Registration and additional information is available here, and on the Ride’s Facebook page.