Arrrr! Meet the Pirate of the Spokane River 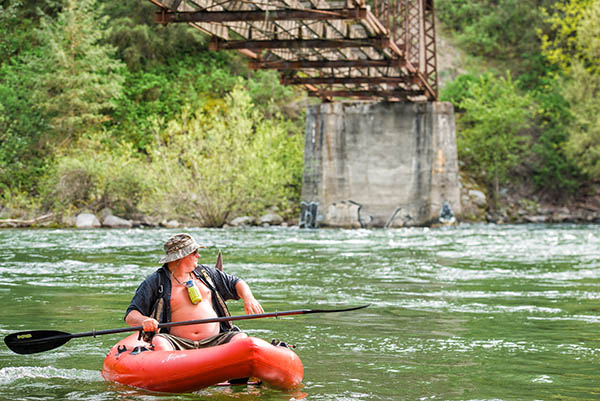 “Ahoy! Have you paid the toll?” Shain McPherson, 39, greets a trio of floaters from under a maple tree on a sandy cove of the Spokane River. He hoists a river beer in their direction and then goes back to regaling his audience with river tales as the Spokane River Pirate.

It’d be difficult to find a Spokane resident more connected to the day-to-day hum of the Spokane River than McPherson. Like many long-term partners, he and the river have even started to take on the same qualities: a little rough around the edges, but constantly moving. Gregarious, even McPherson’s conversation is like the river: a never-ending stream, occasionally eddying back on a point but mostly propelled relentlessly forward.

A lifelong Spokane resident, McPherson floated the river only a few times a year until about ten years ago, when he took to the water for the same reason most pirates do: drink. “My girlfriend told me I could no longer drink on dry land, so I found the loophole!” laughs McPherson. 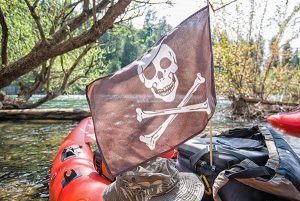 One night after a day on the water, McPherson and a friend joked about staking a claim to a small island exposed during low water and defending their fiefdom with a pointed stick. “There was only one narrow channel through the river, so we figured we’d charge a toll to pass by: a dollar or a beer,” says McPherson. “Couldn’t pay? Here’s a little poke to your boat with the pointy end of the stick to send you on your way.” Instead, he planted a tiny skull-and-crossbones flag on his inflatable kayak and embraced the pirate’s life.

And like most pirates, McPherson seems most comfortable when he’s in contact with the water. Last year, he met his goal of floating the Spokane at least once every week. But he suffered a setback when he had a stroke while on the river. “That stroke nonsense” is how he refers to it with characteristic nonchalance, but it has slowed him down some. He feels less nimble in his inflatable kayak than he did before, and he’s lost some hot- and cold-sensitivity to his right side, but he’s still out on the water regularly, sometimes four or five days in a row.

Although he floats the river year-round, McPherson in particular enjoys mid-spring, “before everyone else is out on the river.” He’s also fond of full-moon floats during the summer, which he informally organizes through his Spokane River Pirates Facebook group. 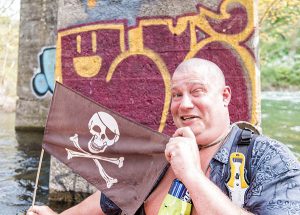 It’d be easy to see the skull-and-crossbones flag and hear the portable stereo playing something from Sublime and dismiss McPherson as just a one-man beer float. But he takes seriously his self-appointed role as a Spokane River steward, one who touches base regularly with and supports the trash pick-up and conservation efforts of the Spokane Riverkeeper. McPherson takes pride in hauling out any garbage he encounters, and he’s at his most incensed when lamenting the river users who leave theirs behind.

One gets the sense that McPherson is frequently disappointed with his fellow humans and would just as soon surround himself with wildlife, especially when he starts cataloguing all the creatures he’s seen along the Spokane: minks, skinks, osprey, otters, moose and others. Says McPherson, “I like animals better than people.” Nonetheless, he’s jolly and welcoming to the boaters, bikers and dog walkers he encounters, regulars and strangers alike. Motioning to the high-water mark of the river bank, McPherson says “When I’m on the water, I leave all my dryland problems up there.” //