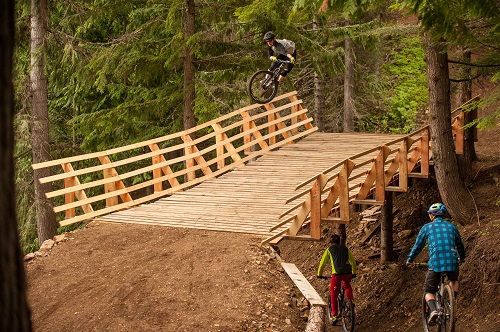 Silver Mountain Bike Park was voted the #1 bike park in the Northwest for the second year in a row. The rider survey was conducted by MTBparks.com, an online guide to North American mountain bike resorts. “We are honored to have such strong support from the riders in our region,” says Willy Bartlett, the Marketing Coordinator at Silver Mountain Resort. “This award fuels our commitment to continually improve and expand our park. Our aim is to be the top destination in our region for riders of any ability level to be able to have fun and challenge themselves. Whether you’re just getting started mountain biking, or a dedicated gravity rider, we have the trails you’ll love, and new rental bikes that will allow you to push yourself.”

In 2015, Silver Mountain Bike Park built three new trails and continued to rebuild its existing network, bringing trails up to modern bike park standards. Silver also played host to a stop on the Northwest Cup, the largest downhill race series in the Northwest, drawing over 200 racers in from all over the West Coast. With improvements like an expanded rental bike fleet, weekly ladies rides, certified instructors, a fun downhill race series and fresh trails, Silver has become a mountain biking destination.

Improvements for 2016 include opening three weeks ahead of schedule, a brand new fleet of rental bikes, some major trail additions, hosting the almost sold out North American Enduro Cup and continuing to expand on the massive trail complex that Silver is famous for. Be sure to check out Old School, a freshly re-built trail that is highlighted by a 40-foot table top jump that is also an overpass bridging another trail below. Old School is sure to be a signature trail for years to come, with fantastic flow and jumps that are large, but built to be friendly for all ability levels. Even as the trail crew is putting the finishing touches on the existing network for opening day, new trails are being carefully laid out for the future.

Silver will be opening nearly 100% of its bike trails accessed by the gondola and Chair 3 on Memorial weekend. After that, the bike park will open for mostly extended weekends through June 24, when they kick off 7-day-a-week operations. Silvermt.com.