Fuel for Thought: Eating to Keep Your Brain Working 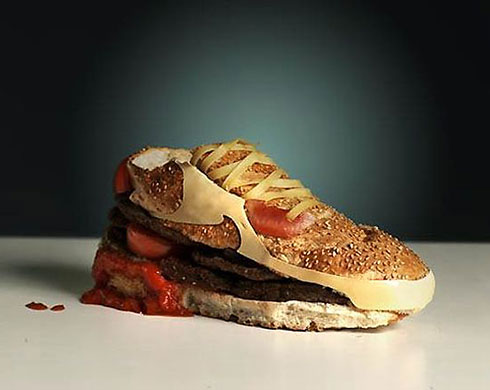 Fact: Our brains are much smarter than we are. They operate like some kind of Kasparov of homeostasis, outsmarting our most determined intentions with calculated strategies to (mostly) keep us from killing ourselves. That is pretty much what the legendary bonk is: Your brain’s checkmate move to keep you from depleting your stores of glycogen, lest it run out of enough to fuel its own glucose needs.

The closest I ever came to dumpster diving was a direct result of my brain trying to outsmart me. And possibly my attempt at being an elitist vegan, which is second to being a breathetarian. By mile 15 I was wondering if eating raw squirrel was safe. Somewhere around mile 20 I had considered sucking the salt out of my shirt. At mile 24 I passed a garbage can that had a sandwich box on top. I could hear it calling to me. My brain was telling me I was surely going to die if I passed that stale sandwich. It told me there was probably even some pickle left on it. I was saved by reminding myself that I was a vegan, and a vegan would starve to death before eating mayonnaise.

This experience was only surpassed by the time I went Paleo and tried to run a marathon on cashews. Another fact: Chewing cashews while parched and running is a choking hazard. Also, it is inappropriate to gnaw at plump babies on race sidelines.

Eventually, I decided to go to nutrition school and figure out how to eat. Years of research and recipes later, I’ve got a plethora of brain and body fuel ideas to keep you hard at whatever it is you might be doing.

Here’s an energy bar recipe with a healthy ratio of protein, fat, carbohydrates, minerals, and electrolytes. They’re a mixture of slow and fast burning goodness for sustained energy and less risk of going cannibal on your biking buddies. It is fuel that tells your brain to tell your body it’s okay to keep going. // 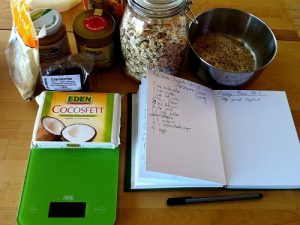 1/2 cup oats, musli, bran flakes, corn flakes – whatever you’ve got in the cupboard. If you’re paleo, you can use ground or sliced nut mixtures

Melt cocoa, honey, and almond butter in a small sauce pan while stirring. Set aside to cool. Mix all your dry ingredients, then add warm liquid mixture to dry goods. This should make a sticky, crunchy mixture that hardens when it cools. Dump the mixture onto a baking sheet and, using a piece of baking paper, press it into a firm square – be liberal in your squishing or they’ll fall apart later. Set in fridge or freezer to chill. Remove, cut into little squares or bar shapes and wrap with wax paper. They store for weeks in the fridge. Eat them. Share them. Never bonk again. //

Ammi Midstokke is the owner of two birds nutrition, where she seeks to find the balance between food dogma and cupcakes. More recipes and ramblings can be found at Twobirdsnutrition.com.