Behind the Scenes with a Wildlands Firefighter

Kurtis Robinson is not someone who sits back and watches life happen. That’s true in his work as president of the Spokane chapter of the NAACP and in his involvement on a number of other community-minded and social justice-focused organizations (Better Health Together, the Revive Center for Returning Citizens, Smart Justice Spokane, and Just Lead Washington—to name a few). It’s certainly also true of his work as a wildlands firefighter.

It was 2007 when the Manilla Creek fire crested down the hill toward his home on the Colville Reservation in northeast Washington. “I sat on my lawn with a garden hose and called the tribal fire department,” Robinson says. The advice was ambiguous: either evacuate—or stay home. “I decided that just wasn’t a good enough answer for me, and I would never be that helpless again,” he says.

That’s when he decided to get trained with the Colville Tribe and went to work as a wildlands firefighter in 2009. In 2017 he completed the West Plains Fire Academy, and this year he completed the Western Washington Interagency Wildland Fire Training Academy. Today he’s an engine boss and an incident commander with the Washington State Department of Natural Resources, fighting regional wildfires from May through October. “At a certain point it just gets in your blood,” he says.

Typically, when a fire “goes off,” it’s identified by either a backcountry fire lookout tower, a call-in, an airplane, or, more rarely, a satellite. From there the situation is assessed. In some remote Forest Service and National Park Service wilderness and backcountry areas, wildfires may be monitored and allowed to burn to let this important natural process play out in ecosystems that benefit from and depend on fire to remain healthy. Fires near roads, homes, and communities, on the other hand, typically see an aggressive fire-fighting response.

Once the fire has been assessed, the fastest, most effective resources will be called in to quickly address the situation, Robinson says. These resources include smoke jumpers, hotshot crews (teams trained to battle the most intense, hottest fires), or Helitack (“helicopter-delivered fire resources”).

Then other levels of crew, like Robinson’s, roll in with their additional equipment. “There will be a base camp or staging area. We’ll meet up. Depending on the intensity [of the situation] we’ll…hop out and get right to work,” he says. They wear gear including flame-resistant Nomex clothing, fireproof helmets, wildland firefighter-approved boots, safety goggles, gloves, and Nomex shrouds. 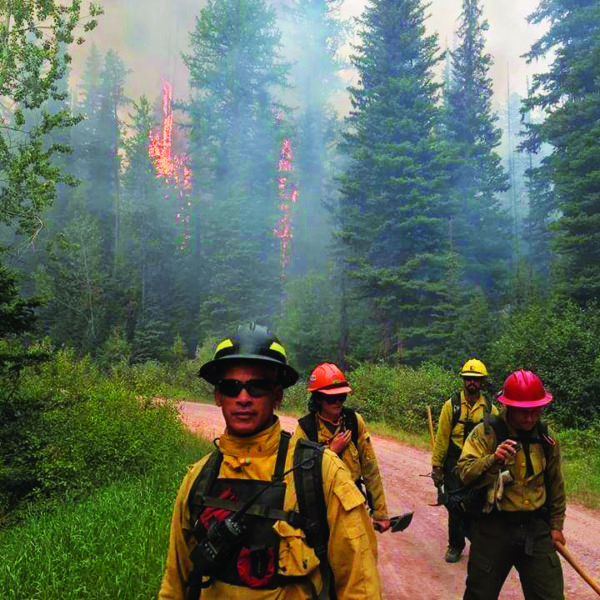 This fire season Robinson has been on the move and dispatched from Forks, Washington, to Yakima, Spokane, and Colville. “Basically, doing what we call ‘chasing fire,’” he says. Wildland firefighters carry along with them individual tents and mats for sleeping, though sometimes they’ll be put up in a space like a school gymnasium.

Sometimes Robinson and his colleagues arrive on the scene to deal with intense flames. Other times, “it’s in mop-up stage; we’re just going around to make sure everything’s out.” Unsurprisingly, a huge amount of flexibility is required. “At any point you could drive all day and work all night, or drive all day and turn around and work the next day,” he says.

“The other day we ran for, oh gosh, about 24 hours straight,” says Robinson. He and his crew were traveling from pre-positioning (essentially a staging area) to a fire, and then on to another fire, where they took on the night shift to give the firefighters already on the scene some rest.

Much of the work Robinson and his colleagues do, whether it’s putting out small fires near town or out in the middle of nowhere, goes under the radar. “People don’t really understand how many fires they don’t hear about, because there are just a bazillion of them that never make the news, that never make social media. We’re already on them and putting them out before they get that big. That’s kind of the gig,” he says. Frequently there are “one-acre, two-acre fires that could and would have gotten out of control had we not been there doing what we do.”

“Frankly most of the stuff we’re encountering these days is human-caused,” he says. “[For me] the question of whether we impact our environment has been answered.”

There are practical prevention steps we should all be taking to reduce fire risk, he says. A few easy ones Robinson mentions: make sure campfires are put completely out. Don’t flick cigarette butts out the car window. Have a spare tire. The last step may seem strange, but he says the scenario plays out all too often: driver gets a flat, keeps driving, the wheel turning on the asphalt creates sparks, sparks light paper-dry grass, a brush fire starts.

For Robinson, his commitments and involvements are all interrelated: social justice, the environment, and the need to think about how our choices impact our forests and future generations. “That’s why I am so poured out into all of this,” he says. “I absolutely believe that we can do better, and that we need to.” //